Congratulations to Coldwater Cavalier Nick Kline as he has been selected as the Cavalier Athlete of the Week for the week of March 1st to March 8th.  Nick is a junior and is a member of the Cavalier Wrestling team.  Nick finished as Sectional Runner Up at the LCC Sectional earning a trip to the Districts at Troy.  At Troy, Nick won his first match before falling in his 2nd match of the day which dropped him to the consolation bracket.  Nick then proceeded to win his next 2 matches to put him in the podium bracket.  Overall, Nick finished 6th in the Districts.  Congratulations Nick for being this weeks Cavalier Spotlight Athlete of the Week! 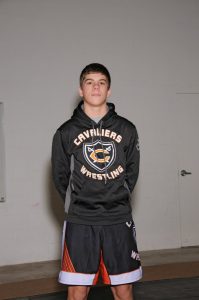