Coldwater junior girls soccer player, Elise Kramer is this weeks “Cavalier Spotlight Athlete of the Week”.  Elise plays goalie for the Lady Cavaliers and helped to lead them to 2 wins last week over Crestview and Celina by allowing only a single goal in each game.  On Saturday, Coldwater took on the states # 8 ranked team, Celina, in a home match.  The Lady Cavaliers won 2-1 with a great defensive effort led by Elise at goalie.  She made countless outstanding saves in keeping the Bulldogs out of the net until the final minutes of the game.  Elise also has 2 shutouts on the year over Delphos Jefferson and Van Wert.  Congratulations Elise on being named this weeks “Cavalier Spotlight Athlete of the Week”! 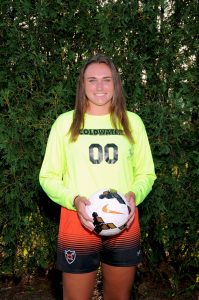